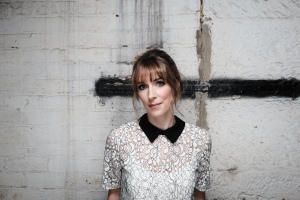 Emily Smith (SCO) is a popular folk singer and musician whose acclaimed career thus far forms an arc from the earlier albums featuring trad/folk songs and songs by Robert Burns, often sung in Scots, to her current, very Americana-influenced style.

She has a degree from the Royal Conservatoire of Scotland and was BBC Radio Scotland’s Young Traditional Musician in 2002. Her solo career as a recording artist began in 2005. For the last several years she has performed and recorded with New Zealander James McClennan, and they now form the Smith & McClennan duo.

Emily’s music, both the Celtic and American strands, comes across as natural, driven mostly by acoustic instruments and her easily expressive, never forced performances. Hers is a very song and ballad driven catalogue, music and tales to listen to, very little party stuff here.

Her 2014 album Echoes expanded and electrified her sound somewhat but with the Smith & McClennan duo she’s back in the acoustic mode.